Teredo for Windows 10, and why the damn thing needs to die.

Toredo, to put it simply, is a virtual tunneling network adaptor that allows a client full IPV6 connectivity whilst not having direct connectivity to an IPV6 network.  It achieves this even whilst behind an IPV4 connection and even with NAT firewalls.

Why do I even need it?

Xbox for Windows.  That whole “Xbox Play Anywhere” push? Essentially, Microsoft’s push for Gaming on the Windows 10 Platform means that if you want to play any of these titles online, your essentially using the Xbox Live API which uses the Teredo IPV6 tunnel.  Microsoft uses the Teredo system to allow cross-platform multiplayer between not just PC users, but also Xbox One users.

So what’s the problem?

Stability is the number one issue with Teredo, that and it almost seems as though each time Teredo encounters a problem, it requires a different solution. Theoretically it all sounds simple; ensure Teredo adapter is installed, system services are running, Windows firewall is on and the Teredo server is correct.  Simple as this is all straight out of the box for all Windows 10 installations without even having to move a finger. 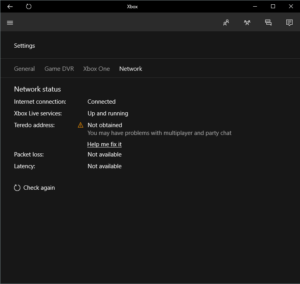 I have yet to meet a gamer who has yet to encounter this error.  Clicking the error takes you to this link:

Lets run through the average Windows 10 gamers experience with Xbox on PC Multiplayer:

Worked like a charm!  You feel a relieved and figure, “hey, maybe just a minor driver issue, no matter fixed now!”

Lets jump on some multiplayer again!

Lets try something else!

Here’s another caveat;  Teredo NEEDS the Windows 10 Firewall to function correctly.  3rd Party firewalls will either not work, or have mixed results.

So lets just say this fixes the problem!

This isn’t an uncommon issue either; try Google “teredo address not obtained” just to get an idea of how common this issue.  In fact, of the 5 peaople I personally game with, EVERY one of us have experienced this issue.  Three of us are at the point where the Teredo adapter will not work no matter what we try.

Even when the damn thing does work, if more than two or three friends jump into the same game, EVERYONE’S session drops out completely.