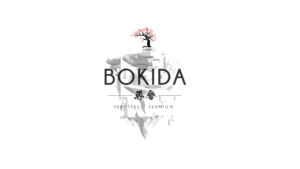 Bokida: Hearfelt Reunion, is at its core, an exploration game.  Set in an enormous open world, Bokida does a great job of reminding you just how insignificant you are in this enormous setting.  Taking control of “the Messenger”, you set off on a journey to activate several monoliths, which will eventually bring two planets together to reunite two long time lovers. Whilst the plot doesnt go into a great amount of detail, my personal interpretation is that the two lovers are actually the two planets, longing to be reunited.  This is made more evident when one of them begins to talk about the “forces that have kept them apart for so long”.

The gameplay features some simplistic puzzle elements, guided by a floaty-yet-somewhat-accurate physics engine, which provides you with a set of four basic tools; build, cut, push, and clean.  These tools are used to solve simple puzzles like guide the laser to the monolith, or cut the growing branches the right way to ensure they reach a certain object.

The environment is simply stunning.  Whilst the game takes a minimalist approach to the use of colour, the game is presented primarily in black and white, with some eventual touches of colour.  There are no textures or lighting effects, instead the game is presented in outlines and opposing colour gradients, but manages to evoke a true sense of amazement, together with an incredible sense of scale. 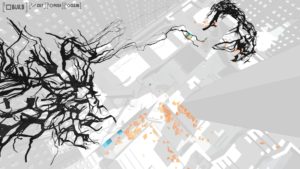 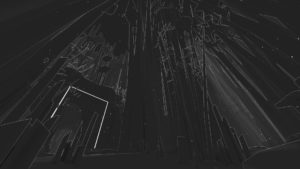 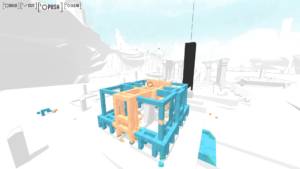 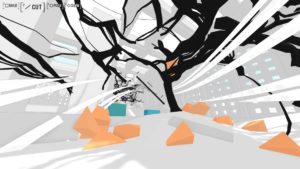 The puzzle elements however are too simplistic to even acknowledge as a major gameplay element; and rightfully so, the developers, have never advertised the game as a puzzle game.  With the tools offered and some more focus on these puzzle elements, the game had the potential to proudly sit next to the likes of games like The Witness.  Bokida, is a neat package to look at, but the minimalistic gameplay approach, patchy story, and short gameplay (2-3 hours), leaves much to be desired.