What do you get when you cross Metroid and Super Meat Boy, two classics in their own right?  A french Musketeer armed with a sword, gun, and Gauss Puncher, able to propel himself using a gas powered device, across tightly designed puzzles, satisfying hordes of enemies and incredibly well designed boss fights. 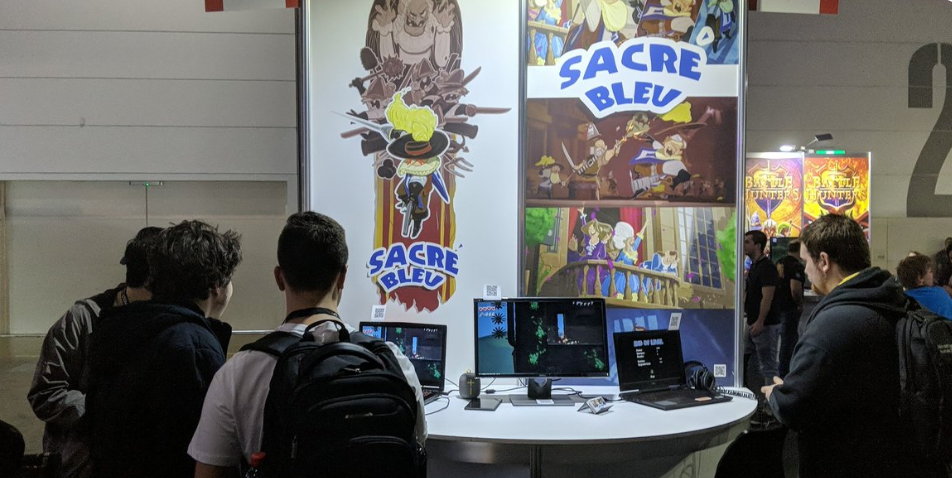 Developed by solo Norwegian developer, Stein Loetveit, Sacre Bleu personaly stole the entire show that was PAX 2019 and placed itself to the top of my list as most anticipated game.  The level design is precise and meticulously planned out, with trap triggers and platforming timed to absolute perfection; and to complement the level design, the control scheme is tight and precise.

AAAND THE WINNER TODAY WAS:

For a game with such a tight focus on movement, we would have expected it to be at the expense of combat, however it too has been crafted with the same attention to detail as every other element of the game, with satisfying slashing, gunfights, mid-air combat and maneuvering, as well as varying enemy styles who are able to carry shields, fire arrows, or melee you in close combat.

It’s hard to believe that this game is being developed by one guy; the same person responsible for programming the control schematics, gameplay and AI, is also responsible for the amazing artwork and animation.

There is also the human aspect of this game which is already years into development.  It is obviously a labor of love for Stein who is in no hurry to “wrap the game up”, and stick it on a digital storefront until it meets the standards he has set.  Stein is a genuinely charismatic individual, who has an infectious aura of enthusiasm surrounding his passion for this project, that you just can’t help but get sucked into.

I can’t wait to experience this game in its entirety.  As an added bonus, I expect this game to become a new staple to speedrunning events, with people itching to scrape that single millisecond off their times.